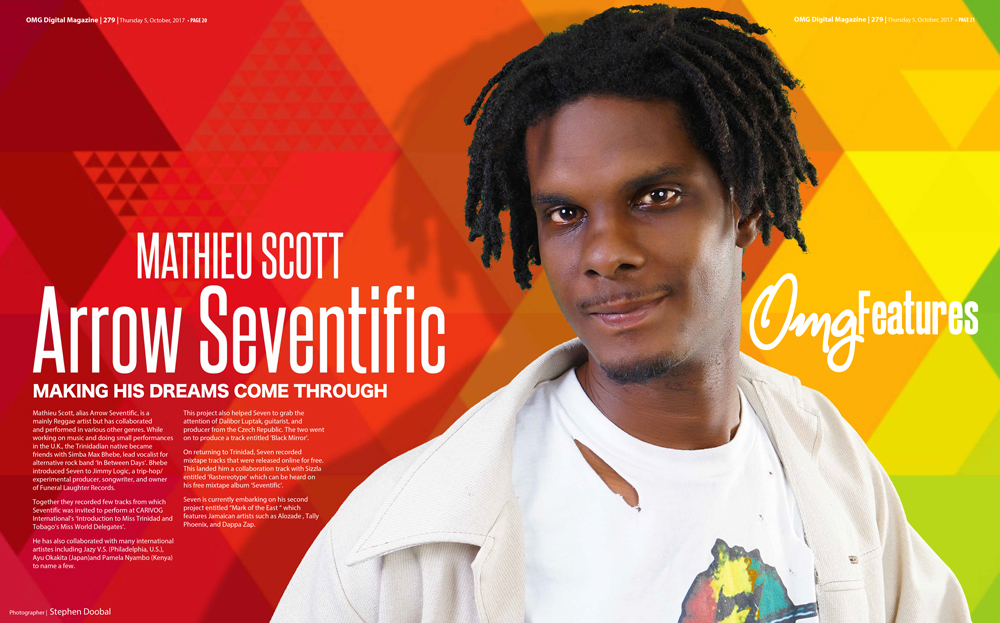 Mathieu Scott, alias Arrow Seventific, is a mainly Reggae artist but has collaborated and performed in various other genres. While working on music and doing small performances in the U.K., the Trinidadian native became friends with Simba Max Bhebe, lead vocalist for alternative rock band ‘In Between Days’. Bhebe introduced Seven to Jimmy Logic, a trip-hop/experimental producer, songwriter, and owner of Funeral Laughter Records. Together they recorded few tracks from which Seventific was invited to perform at CARIVOG International’s ‘Introduction to Miss Trinidad and Tobago’s Miss World Delegates’. He has also collaborated with many international artistes including Jazy V.S. (Philadelphia, U.S.), Ayu Okakita (Japan)and Pamela Nyambo (Kenya) to name a few. This project also helped Seven to grab the attention of Dalibor Luptak, guitarist, and producer from the Czech Republic. The two went on to produce a track entitled ‘Black Mirror’. On returning to Trinidad, Seven recorded mixtape tracks that were released online for free. This landed him a collaboration track with Sizzla entitled ‘Rastereotype’ which can be heard on his free mixtape album ‘Seventific’. Seven is currently embarking on his second project entitled “Mark of the East ” which features Jamaican artists such as Alozade , Tally Phoenix, and Dappa Zap.